What Are Cricket Betting Markets?

Cricket betting markets refer to the variety of bet types on offer by betting sites for every match.

Each market is based on some unique elements or probable outcome of the match, which the bookmakers decide based on the players' performance in the recent past. The bookmakers analyse which events in a cricket match their customers would like to bet on, and accordingly create markets based on these events.

However, bookmakers propose unique betting markets when it comes to the top cricket tournaments and the best cricket leagues, as these events are highly in demand and popular among most punters.

The global sports betting market is valued at more than $85 billion. According to a report by Statista, the industry's market size will reach $92.9 billion by the end of 2023. During major cricket tournaments and events, such as the Indian Premier League, India's number of active sports bettors regularly exceeds 370 million. As estimated in 2021, the local sports betting market was valued at over $1.2 billion, with the vast majority of the revenue of these betting sites coming from cricket bettors.

Each cricket betting market projects different odds, which can help you bet on the markets best suited to your risk appetite if analysed properly. Moreover, knowing how various cricket betting markets operate enables you to study the factors that influence that market and improve your betting success rate.

It doesn't matter which cricket betting app you choose – the fundamentals of these betting markets remain the same.

We have researched and listed the most popular cricket betting markets for you below, along with our tips on how to bet on each one.

A variation on the Match Result market (which also has ‘draw' as an option), the Match Winner market is one of the simplest to understand and play.

As the name suggests, you must predict which team will win the match. (Note that if the game ends in a draw, your bet would be considered void). The team with the higher odds is the underdog, while the team carrying shorter odds is expected to win.

The Toss Winner market is the simplest one, and it frankly doesn't require any calculation or science. You just bet on the toss, which is as arbitrary as it can get, considering either team captain has a 50-50 chance of winning the toss. The market also reflects that, with the same odds for both teams. 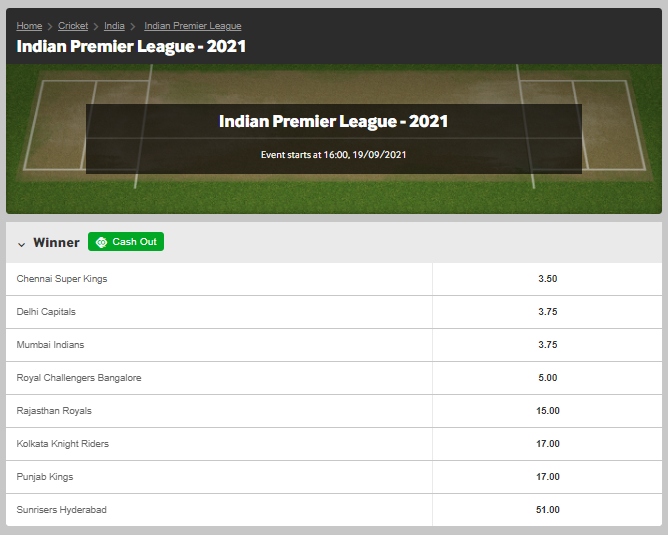 Sometimes referred to as the Series Winner market, this one requires you to predict which team would win the whole series/tournament – not just an individual match. Of course, you'd have your favourites heading into a particular contest, but you should never let your bias creep in.

Widely available across matches, this cricket betting market comes to life when a particular game sees a host of top batters take the field. And as the name suggests, you have to correctly call the highest run-scorer of a match.

Now, remember that this market could have two variants. One is the Top Team Batsman, where you must predict which batter will score the maximum number of runs from his team. And the other is the Top Batsman for the entire match, where you bet on the batter you think will emerge as the highest run-scorer from both teams.

Of course, this cricket betting market is a common feature for tournaments as well, where you predict the most prolific run-scorer in the whole tournament/league.

As you have probably realised, this is not the easiest market to ace, especially if you are betting on a match involving two heavyweights. Worry not, though – below are a few useful tips worth keeping in mind.

5. To Score a Century

This cricket betting market is designed to allow you to bet on the player you think will score a ton in the game. 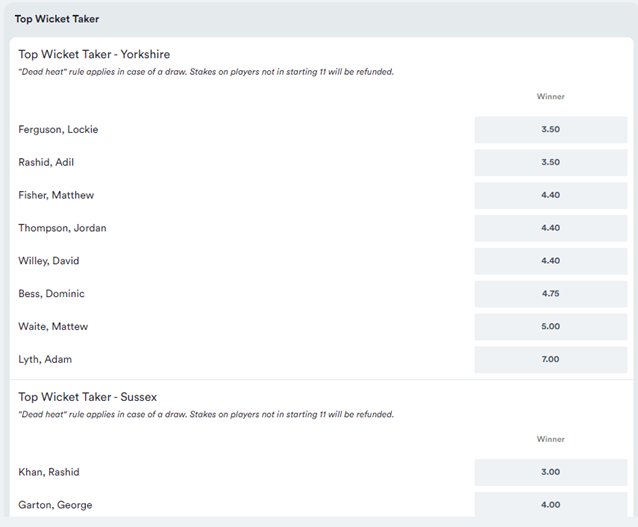 Available across formats, the Top Wicket-Taker market lets you wager on the bowler you think will take the most number of wickets in a particular match.

This cricket betting market is also available for entire tournaments and series.

Another fan-favourite cricket betting market that involves betting on how the first wicket in the match will fall. The options you get are caught, bowled, stumped, run out, and LBW (leg before wicket).

MUST READ: Most Common Methods Of Dismissal

A player given the title of Man of the Match (MoM) is considered to have contributed the most to his team in a particular game. It can be the highest run-scorer, the best bowler, or even an exceptional fielder. More often than not, MoM is awarded to a player from the winning team, but there have been multiple exceptions over the years.

Betting on this cricket betting market is fun, but requires a thorough understanding of the players’ recent performances.

Probably one of the safest and best cricket betting markets, considering there's relative security to your stake when you place a Draw No Bet (DNB). It eliminates the option of a draw from a wager, allowing you to bet on a home win or an away win.

If your selection wins, you win your bet. However, if the match ends in a draw, your stake would be refunded, so you neither win nor lose. Of course, you lose your bet if your selection loses.

Thus, even though the odds of a draw no bet are lower than match winner and final result markets, the risk involved is reduced too. And that's the trade-off you're settling for.

Are There Cricket Betting Markets You Should Avoid?

When it comes to variety in cricket betting markets, the more, the merrier. However, there are a few that we suggest you steer clear of, simply because either they're too complex and require almost superhuman prediction prowess, or are plain speculation-based with no room for application or analysis.

While you will always need a sprinkling of luck to win any bet, here at CBA, we encourage you to bet on markets that aren't solely driven by conjecture and speculation.

The following is a list of some markets we'd advise you to avoid:

There are many more that can feature on this list – this is simply to give you an idea of the kind of cricket betting markets that are best to stay away from.

The range of markets for betting on Test matches has significantly expanded in recent times, especially with online cricket betting picking up pace. Apart from the traditional ones, there are now multiple in-play betting or other statistical bets, including first innings lead, opening partnership, and to score a 100.

The following are cricket betting markets tailored for the longest format of the game:

One Day Internationals enjoy a massive following among betting enthusiasts, and bookmakers come up with tailored markets to cater to ODI loyalists. Interest generally intensifies by the time the World Cup or other top-tier matches come around, but you'll have an array of ODI cricket betting markets throughout the year.

The following are cricket betting markets tailored for 50-over games:

The T20 format wasn’t taken too seriously in the beginning, but after it finally caught on with the first-ever T20 World Cup in 2007, there has been no looking back. Over the years, the shortest format has become a hit among cricket betting buffs.

Now that you know about the top cricket betting markets, get going and explore betting in new markets. As always, we advise you to select value over everything else while placing bets.