India is a cricket-loving nation at heart, and it’s no surprise that the country has given birth to several top-notch batsmen who have mesmerised the global cricketing circuit with their performances, and etched their name in gold among the league of batting legends.

In this blog, we have researched the ten top Indian batsmen who dominated the cricketing scene in their days, and also included names of the top batsmen in the current squad. And of course, some cricket betting information, which is common for all of the top cricket leagues, at the end!

The 10 Best Indian Batsmen of All Time

Here is a list of the ten top Indian batsmen who have consistently showcased exceptional cricketing skills throughout their career in the Indian cricket team:

The God of Cricket, Master Blaster- these are some titles that Sachin Tendulkar has rightly earned while playing for the Indian side for more than 24 years. The short-heighted batsman started his international career with a Test match against Pakistan at the tender age of only 16 years.

Ever since then, he has displayed nothing but sheer brilliance while batting and has single-handedly brought many victories for the team. His passion and dedication towards the sport has earned him several laurels, the most prestigious one being India’s highest civilian honour- the Bharat Ratna, and even put him in the league of international cricket legends like Don Bradman and Vivian Richards.

One of the starkest memories of his hard-hitting skills is an ODI match against South Africa in 2010, where he became the first player to score a double-century in the ODI format. Performances like these, and his immense contribution to the growth of Indian cricket, has earned him the status of a legendary Indian batsman and the No. 1 spot in our list of the top Indian batsmen.

Counted among the old guards of Indian cricket, Sunil Gavaskar belongs to the legendary team that won the maiden World Cup for India in 1983. He is one of the most flawless opener batsmen that the Indian team ever had, and is arguably the first Indian batsmen who introduced technical batting on the Indian side.

Admired for his concentration, hard-hitting capabilities, and an almost unbreachable defence, Gavaskar was a nightmare among bowlers.

He has received the prestigious Padmi Shri and Padma Bhushan from the President of India for his contribution to Indian cricket, and was also inducted in ICC’s Hall of Fame in 2009.

The tall, slimly-built Dilip Vengsarkar belongs to the early-80s generation of Indian cricketers, and was adjudged as not only the top Indian batsman but also the best batsman in the world when the ICC rankings were first launched during 1986-87.

He opened in the middle order and was admired for his fearless stroke shots against the West Indies pace attack consisting of legendary bowlers like Wayne Daniel, Colin Croft, and Joel Garner. The Gavaskar-Vengsarkar duo was, in fact, famous for their high-precision batting and long partnerships, and held permanent positions in the team almost throughout their careers.

Read:Learn about the best cricket betting apps to place bets on your favourite IPL 2022 matches here!

The best example of a classical batsman with laser-sharp focus and a ton of patience at the crease, Rahul Dravid is the most clinical batsman the world has ever known. A firm believer of hard work and perseverance, Dravid was the most dependable batsman in the squad and toiled hard to reach at the top.

He had the skill of holding the crease for hours together when the team wanted to save wickets (he once held the crease for 12 hours straight in a test match against Pakistan), while swirling the bat wide and high at the opportune times.

He was extremely reliable and had saved the team from several knocks during critical match moments, earning him the reputation and nickname of ‘The Wall’.

Often compartmentalised as a typical test cricketer, he has a record of scoring 10,000+ runs in ODIs, clearly proving his commendable contribution in limited-overs format too. His fielding skills were deadly too, and he is considered as the most successful slip fielder of all time.

The ‘Maharaja of Bengal’ changed the face of Indian cricket during his tenure as the captain of the Indian side. The left-handed batsman brought the much-needed aggression to the Indian side, and changed the image of the team from the soft-spoken squad to the rather aggressive side (remember the T-shirt spin at the Lord’s?).

He undertook a massive overhaul of the team and experimented with diverse strategies and new players. As for his batting, he wreaked havoc with his off-break shots and reigned as one of the leading ODI batsmen during his stint with the team.

One of his best performances was against Sri Lanka in the ICC World Cup 1999, where he scored 183 runs in 158 balls and led the team to victory by a massive margin of 157 runs.

Known as much for his quick-wit as for his batting prowess, the opener batsman enjoyed his innings like no other batsman. Be it tests or ODIs, Sehwag’s batting style was always the same- hit each delivery with an eye on the boundary, and boy, that served him well.

His batting stance and aggression on the field was extremely similar to Tendulkar’s, especially the back-foot play and the smooth straight drives, which also got him the reference of being his clone in the cricketing fraternity.

In a career full of daring batting with no worry about losing his wicket, he has built many records that other batsmen can only dream of. He was the first Indian batsman to score a triple century, and went on to score another one. He was also credited for scoring the highest runs in ODI during that time, when he knocked a smooth 219 runs against West Indies, with six overs to spare.

One of the most revolutionary captains of the Indian team, Dhoni can be distinctly credited for the high fitness standards that has come to be expected from the Indian players today. Under him, the team gave massive opportunities to new talent and experimented with dynamic plays that caught the opposition off-guard many a times.

As for his batting, Dhoni has been a big-time smasher since Day One. Not exactly a technical batsman, Dhoni has carved a homegrown batting technique for himself that has worked fairly well for him. He relies on brute power and quick running in between the wickets to get runs, and is famous for popularising the helicopter shot.

He always delivered under pressure and had a penchant for finishing the game with boundaries. He has also seen the team through several crucial wins, such as the 2007 T20 World Cup and the ICC World Cup 2011, where he led the team to its first-ever World Cup victory at home.

A true test player, VVS Laxman had one of the best wrist plays among the international batting fraternity. His play involved long, elegant strokes which were often better than Sachin’s too.

The best part about him was his ability to play the ball equally well on the off and the leg side. That rare quality made the opponents wonder where to strike him with their deliveries, and particularly so with the Australians, against whom he scored 2,000+ runs in his cricketing career.

The Punjabi lad was the star boy of the Indian cricket team during his entire career until the 2011 World Cup. The tall, left-handed batsman had an aggressive batting style and an ability to turn matches in a few overs alone.

He played a pivotal role in helping the team to clinch the 2007 ICC T20 World Cup, where he knocked six sixes in an over, that too against an established bowler like Stuart Broad. He performed exceptionally well in the ICC World Cup 2011 too, where he won four Player of the Match awards and was also named as the Player of the Tournament.

Probably one of the most underrated Indian batsman, the Delhi-based cricketer received more recognition post-retirement than during his days in cricket. He personified precision and calculative batting, and played well across all formats.

The most significant feats in his career were his performances during the 2007 and 2011 World Cup, where he played a crucial role in getting quick runs for the team during the finals. He scored a brilliant 75 of 54 balls in the 2007 finals and 97 of 122 balls in the 2011 finals, being the top runs-scorer for the team in both matches.

Top Indian Batsmen in the Current Side

We have also listed some of the best-performing batsmen in the current Indian squad. These players have already established themselves or are on the path to establish themselves as some of the top Indian batsmen of all times.

The batting sensation took the world by storm with his athletic fitness and classy shots that drained the blood out of bowlers’ faces. The team regained their test dominance under his captaincy, and also reached several World Cup finals during his tenure.

He recently broke Sachin’s record of scoring the most ODI runs away from home (5,065 runs) and continues to be a solid middle-order batsman for the team.

The newly-appointed captain is the best opener, only second to Gavaskar, that the Indian team ever had. Rohit Sharma is an ardent believer in building skills rather than relying on inherent talent, and that’s something that the batsman had to do a lot to cement his place in the Indian side.

He is a fearless hitter, one who knocks effortless centuries once he tides over the first couple of overs. He has scored three ODI double-centuries, the highest being 264 runs against Sri Lanka at the Eden Gardens in 2014.

The opening batsman has a rather technical and patient playing style, that often draws comparison to the batting great, Rahul Dravid. He has displayed the ability to hold the wicket on challenging pitches like England and New Zealand, and can be counted upon to tide over difficult overs when the team is going through a rough patch. 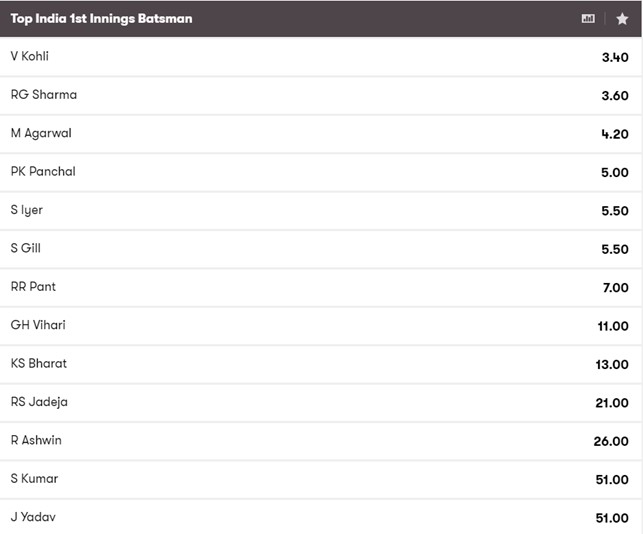 Cricket betting is filled with myriad betting markets that offer punters the opportunity to bet on several important moments of the game. However, one of the most popular markets among all is the top batsman market.

As is evident from its name, this market involves betting on the batsman who will score the maximum runs in the match or the tournament. The market is also commonly referred to as the top runs-scorer market.

Tips to Bet on the Top Batsman Market

Betting has a substantial element of luck, but then not the whole of it. One pro-tip to reduce dependency on luck-based betting is to stay abreast with the past performances and the latest updates to bet right, and win big.

If we specifically talk about the top batsman market, below are some simple tips that you should definitely follow to improve your winning potential in the top batsman betting market:

Apart from the top batsman market, here are some more cricket betting markets that can serve you well while betting on batsmen:

You might wonder how knowing about top Indian batsmen, most of whom have retired, will help you in betting?

You’re right, it won’t. However, knowing about the records and batting styles of previous greats will help you know what to look for in the present pool of Indian batsmen while betting on batting markets, and that in turn will help you bet better!

And if nothing, building your cricket knowledge will help you strike a conversation or two with fellow bettors, and have some more fun while betting.