The Indian summer is right around the corner, and so is the world’s most popular domestic T20 cricket tournament, the Indian Premier League (IPL). In addition to the adrenaline-pumping matches, there is another facet of the league that’s equally exciting for cricket lovers & bettors – the IPL auction that precedes the league!

Bet on the IPL Auction with Betway

Betting on the IPL Auction

There are several leading bookmakers that offer IPL match bets, but when it comes to IPL auction bets, there’s only one bookmaker in the market that provides them – betway.

On Betway, you can place wagers on IPL 2022 auction markets such as: 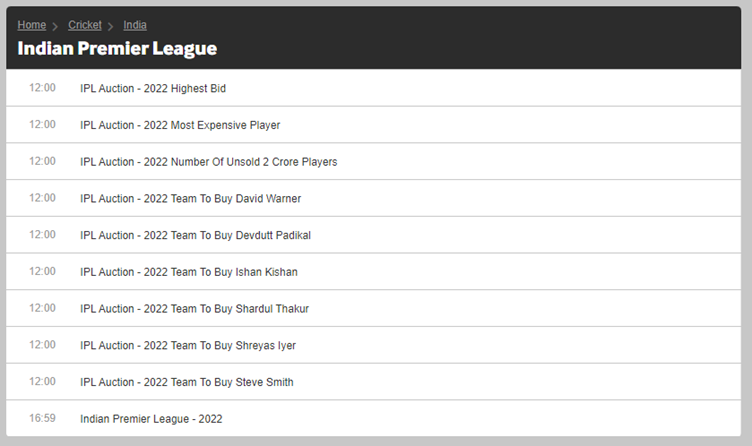 The Indian Premier League includes compulsory auctions before every IPL season. The procedure has been followed since the inception of the prestigious league in 2008, and has always generated a lot of buzz among the cricket community.

Every auction season draws registrations from cricket players across the world, and the 15th season of IPL auctions this year is no different. The BCCI, the nodal cricket board that governs the IPL, received a massive 1,214 player registrations for auction bids this season, out of which only 590 players will be going under the hammer.

The auction for the 15th season of the IPL will be conducted on the 12th and 13th February 2022 in Bengaluru, India.

Bet on IPL auctions with Betway!

How Does IPL Auction Work?

The IPL auction is a star-studded event where millionaire owners hit the auction table with their entourage of seasoned analysts, coaches, and selection experts. The multi-day event is akin to an intense corporate bidding war where teams look forth to bag their favourite players.

Each team is given the option to retain not more than four players from the previous season before the bidding process. The general trend shows most teams retaining their captain, along with a star batsman and bowler.

The remaining players are released and registered into the common auction pool along with debutants, where any team can purchase them for the current season by placing the highest bid.

The league categorises players based on their nationality and playing experience, and has certain rules regarding squad limit for different player categories. We have talked about the different types of players below to help you understand how it affects the choice of players in the auction process.

Types of players in IPL Auction

Here are the categories into which IPL players are divided:

How Many Teams Will Participate in the IPL Auction 2022

Until last season, IPL featured eight teams representing different cities of India. Here are the names of the two teams along with the IPL seasons they have won.

However, right after the 14th IPL season in 2021, the BCCI conducted auctions for two new teams that saw interests from 17-18 parties. The participants included industrialists, venture capitalists, and sports bigshots from across the world, such as the Adanis, Goenkas, Jindals, and the owner of the heavyweight English football club, Manchester United.

Thus, from this season onwards, the IPL will have ten teams participating in the auction, and facing off against each other in the two-months long cricket league.

The auction for the two new teams was held in October 2021, and created a record of sorts with one team being sold for almost one billion dollars. The two new franchises in the IPL are:

The Ahmedabad-based franchise is yet to announce their brand name and logo, but word about it is expected soon.

Spending Limit of Every Team

Each team is allowed to spend up to ₹90 crores for the IPL auction this season, a ₹5 crore increase from the last season. This IPL purse limit is applicable to every team, and includes the salaries that will be paid to retained players.

Now, that we know the basics of the budget limit and how many teams will participate in the IPL auction, let’s discuss the rules for the mega auction.

The auction is a two-day process where the auctioneer calls out the names of every player in the auction list and invites bids for him, turn by turn. The player is sold to the team with the highest bid.

According to the latest BCCI announcement, the current season’s auction list has a total of 590 players – 228 capped, 355 uncapped, and 7 from associate nations. Out of the 590 players, 370 are Indian and 220 are foreign players.

No doubt that IPL auctions are a thrill to track, but they are also quite technical in nature. To help you understand the process in detail and place better bets, we have outlined the most important rules and terms of the IPL auction below:

Here’s a table to give you a glimpse of how many team positions are open in each team after retention (more on retention in the next section) with number of available foreign slots listed separately. Remember, that the squad can have a maximum of only 25 players.

What if the team does not want to let go of its star player? Or players?

Perhaps one of the most important rules for teams, this rule allows the team to retain up to four players before the auction begins. The teams can retain not more than two overseas players out of the four allowed to be retained. There is no upper limit on retaining capped Indian players.

However, this season sees two new teams entering the fray who do not have any previous squad advantage. To give them an equal footing, the BCCI has allowed them to pick three players from the player pool before the auction.

(Please note: All salaries are in INR crores)

The more you retain, the lesser you get to spend in the auctions. The retention rule is a boon for teams looking forward to revamping their squad by buying new players in the auction process.

Bettors should remember that teams with bigger purses have better chances of bagging better players as they can bid more for every player. However, it is also important to note that the performance of retained players is time-tested and can be predicted easier than players who join the team new while placing bets.

You can access the complete list of players retained by each team, their salaries (in INR crores) mentioned in brackets, and final purse balance on the IPL website.

The RTM rule, or Right to Match rule, allows a team to buy back its player (which it had not retained) from the auction pool even if some other team has won the bid for that player.

For example, consider that Mumbai Indians released Rohit Sharma into the common pool, and Delhi Capitals won his bid for ₹20 crores. Mumbai Indians can exercise their RTM card and get back Rohit Sharma by paying the bid price of ₹20 crores even though Delhi Capitals won the auction. Teams follow such tactics when they want to retain a player over and above the retention limit allowed by the BCCI.

Teams usually get two RTM cards that can be exercised during the course of the auction.
However, considering that two new teams are joining the IPL this season, this rule has been scrapped for this IPL auction to avoid any bias in favour of the existing teams.

Teams often need replacements during the course of the tournament when their players get injured or are not in a position to play. The need for replacements will possibly be higher in the current scenario of COVID-19.

Thus, it is a good idea to keep a tab on upcoming but unsold players too, as part of your online IPL betting strategy.

The IPL auction process gives every player the freedom to set their own base price. Base price is essentially a price below which the players cannot be sold in the auction. The bids for all the players starts from their base price.

Players can have a base price anywhere between ₹10 lakhs to ₹2 crores. 17 Indian players and 31 foreign players have registered themselves with a base price of ₹2 crores.

List of Indian players with base price of ₹2 crores

List of foreign players with base price of ₹2 crores

Schedule of the IPL Auction 2022

The 15th IPL auction will be conducted by BCCI in Bengaluru on 12th & 13th February. There are broadly three rounds in the auction process:

Round 1: The capped players, also mostly the most experienced cricketers, are auctioned in this round.

Round 2: After capped players, the names of uncapped players are put out to be auctioned. This is an important stage as a lot of young talent can be grabbed by the teams if they have made the right analysis before the auction begins. For example, players like Navdeep Saini, who now also represents the Indian national side, came to the limelight after being picked up by Delhi in 2017.

Round 3: The last round of the auction, the accelerated auction round is where the list of unsold players is circulated among the teams and based on their response, a second round of auction is held for such players.

Read about top IPL offers and start betting with Betway!

Top Players to Look Forward to in IPL Auction 2022

As you prepare to place bets during the IPL auction, keep a note of these top-ranking players who are generating a lot of interest for the auction season:

Most expensive players in IPL 2021

Studying previous records is an excellent way to analyse prices and determine how high the bids can go in the upcoming IPL auctions. Knowledge of the high-bid fetchers also helps you place better bets while betting on the IPL auction events.

Here is a list of top 7 players that fetched the highest bids last season:

IPL auction bets, though not offered by many bookmakers, are a wonderful opportunity to earn money and have great fun. Do your research well and have fun betting on the IPL auction this season!