With one win apiece, the stage is set for a thrilling finale in the T20 series between Zimbabwe and Bangladesh. Read below for the latest odds, tips and analysis!

The score is 1-1 heading into the final T20I

Schedule for Zimbabwe vs Bangladesh

Both sides are yet to officially announce their line-ups for the Zimbabwe vs Bangladesh series. However, we know that Chamu Chibhabha (ZIM) and Tamim Iqbal (BAN) will be skippers for the ODI series.

Key players can change the state of a game in an instant, so knowing a little about why they are so special can help you make the right decision when betting at the best cricket betting sites in India. Even though the squads for this series haven’t been announced yet, there are a few key players who a sure-fire guarantee to be playing in this series, whom we have listed below.

Before you sign up to any of the best cricket betting apps in India to start placing some bets, be sure to check out the form both teams competing. Good form is a fantastic indicator of future success, and so our cricket specialists have compiled below a summary of how well these two teams have played in 2021 so far.

Bangladesh’s Test record hasn’t been great this year. In 4 matches, Bangladesh suffered 3 losses and 1 draw. Despite this, however, Bangladesh did look strong in their 2 losses to West Indies in February, and in the last Test match played this year, batsmen Mominul Haque and Tamim Iqbal posted strong innings in the first innings.

On the One Day International front, though, Bangladesh posted 5 wins from 9 matches. This included series wins against West Indies in January and Sri Lanka in May. In their last win, Mushfiqur blasted a near-run a ball 125, while Miraz and Rahman ripped through Sri Lanka with 3 wickets each.

Bangladesh has lost all 3 of the Twenty20 matches played this year. It was a series against a strong New Zealand team, who defended their posted totals rather comfortably. While Bangladesh managed to keep New Zealand from scoring any monstrous totals, they really did fail to take many wickets. To sum up, Bangladesh is not going into this Zimbabwe vs Bangladesh series with a recent history of strong form.

Zimbabwe hasn’t played a lot of Test match cricket in the last 18 months or so. In the only 3 matches, they played, they only managed a single win during a recent two-match drawn series against Pakistan in the UAE. A win against a big cricket nation like Pakistan will certainly boost the team’s confidence. However, the series before Pakistan was against Bangladesh, and the loss was quite convincing – an innings and 106 runs, with Zimbabwe only managing to bat a total of 57.3 overs.

In Twenty20 matches this year, Zimbabwe has not fared very well. In 6 outings – 3 against Afghanistan and 3 against Pakistan – Zimbabwe suffered 5 losses, which not ideal just before going into 5 matches against Bangladesh. Interestingly, all those losses were batting second, as it seems if both Afghanistan and Pakistan felt confident, they wouldn’t have a problem bowling Zimbabwe out.

Zimbabwe is yet to play any One Day cricket this year. They did however manage 6 matches in 2020, despite the peak of the pandemic. Unfortunately, they couldn’t pick up a single win, including 3 losses to Bangladesh in March. It is safe to say that Zimbabwe will be going into the Zimbabwe vs Bangladesh series in a rather bad run of form.

You may be thinking of putting your money on Bangladesh’s spinners for your Zimbabwe vs Bangladesh betting strategy – but what if the pitch is an absolute highway? Knowing and understanding the pitch conditions can be crucial when placing a bet on cricket online. Zimbabwe vs Bangladesh will be played on two grounds during this series, and we have included our insights on both these venues below.

This wicket has a history of drying out very quickly and deteriorating significantly throughout a test match, assisting spinners especially. Most teams will aim to bat first and bat only once, knowing the wicket will not support their 2nd innings very well.

Amazingly, Zimbabwe has actually only ever managed one Test match victory on their home turf in Bulawayo. That was over 20 years ago – and against Bangladesh, of all teams!

Poor crowds and hot, dry conditions can make Harare Sports Club tough to play on, and unfortunately, recent years have seen some pretty lifeless pitches too. While these conditions do support spinners and some swing bowlers, generally, once a batsman is settled in, he really shouldn’t lose his wicket easily.

Historically, the coin toss hasn’t seemed to matter too much in One Day matches at this ground, with teams winning 65 times batting first and 68 times batting second. The average total scored at Harare is 233, with only 33 totals below 200.

Key Stats for Zimbabwe vs Bangladesh

Before you begin placing your wagers, check out the statistics below that may become crucial to your Zimbabwe vs Bangladesh betting decisions.

If you're still new to all of this, check out our detailed article on the best betting payment methods in India to find out how to fund your account and start placing wagers! 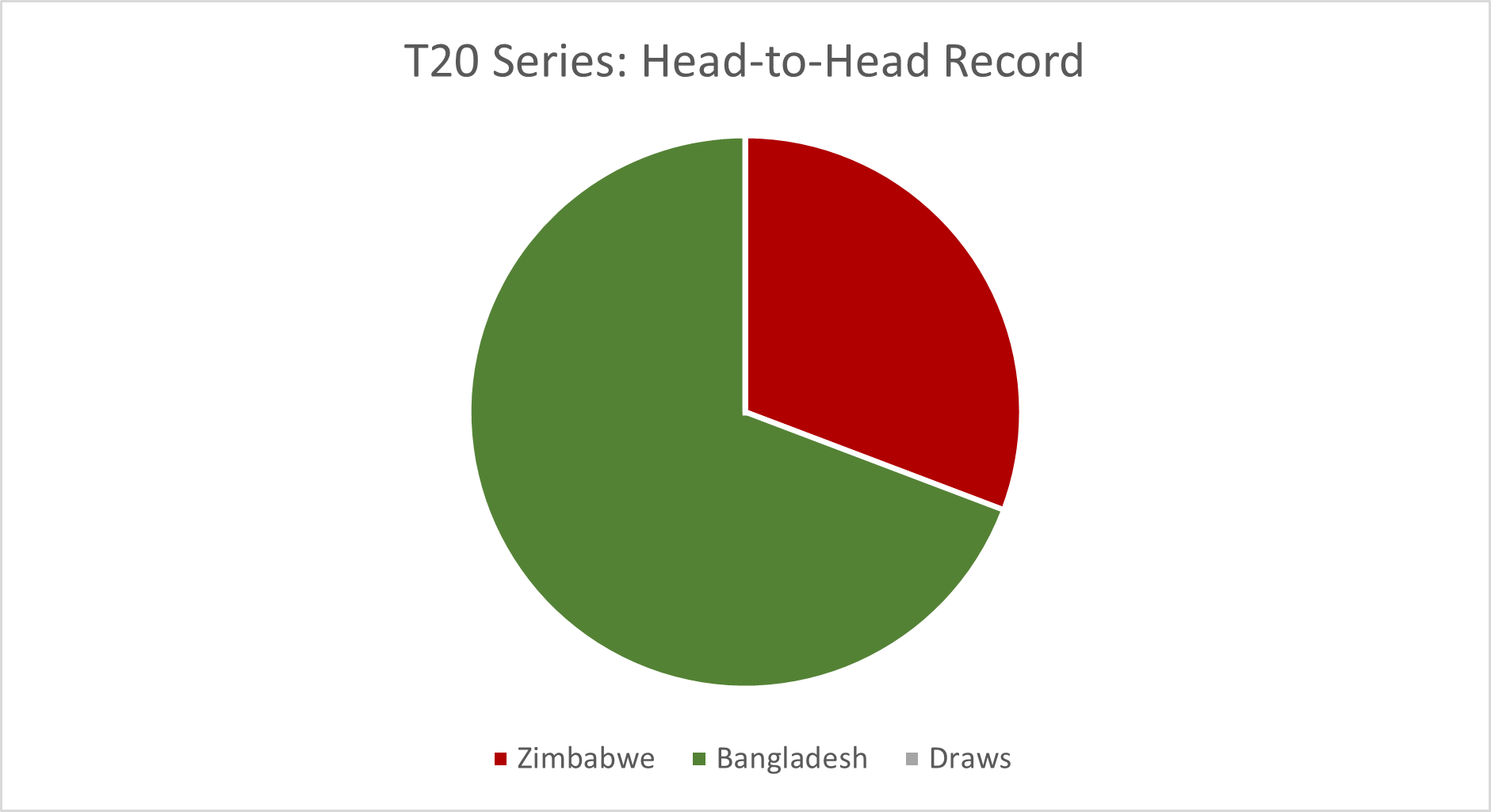 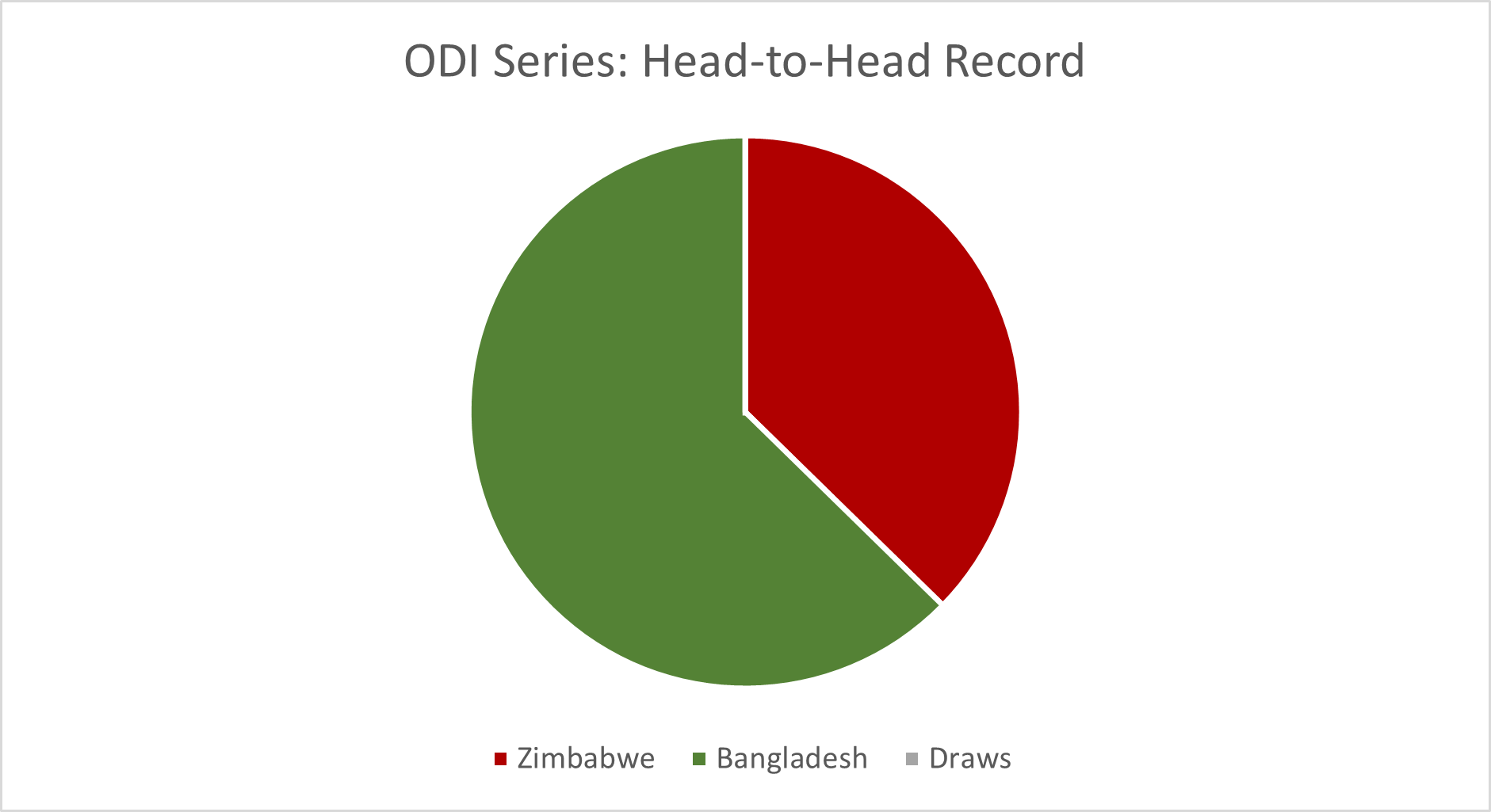 History of Zimbabwe vs Bangladesh

Zimbabwe and Bangladesh have been playing cricket against each other for 20 years now – they first met in 2001 for a two-match test series that Zimbabwe won. At the time, both countries were considered to be very much on the fringe of test cricket.

However, while Bangladesh began to make serious improvements as a Test-playing nation, Zimbabwe fell victim to a serious decline. By 2005, the Zimbabwean cricket team was voluntarily suspended, and further political disruption in the country resulted in a significant decline in scheduled cricket.

Zimbabwe and Bangladesh played no Test matches against each other between 2005 and 2010. They finally met again in 2011, in a single Test match that Zimbabwe won by 130 runs. Since Zimbabwe’s return to international Test cricket in 2011, Bangladesh has defeated Zimbabwe six times in nine test matches.

Which are the best sites for Zimbabwe vs Bangladesh betting?

You’ll find a plethora of fantastic betting sites online that offer great odds across a range of markets for Zimbabwe vs Bangladesh. However, we think 10CRIC, bet365, and Betway should be your top three choices.

When will Zimbabwe vs Bangladesh take place?

Zimbabwe vs Bangladesh will begin with the first Test match on the 7th of July, and conclude with the final Twenty20 on the 27th. That’s a month of fantastic cricket action!

The Zimbabwe vs Bangladesh series will take place in Zimbabwe itself. Zimbabwe will host a Test match in Bulawayo, and the limited-over matches will be played in Harare.

Where can I watch Zimbabwe vs Bangladesh?

We'd suggest picking a Zimbabwe vs Bangladesh betting site from where you can live stream the matches to watch everything unfold in real time. Alternatively, you can watch the series live on the Star Sports Network in India.

Bet on Zimbabwe vs Bangladesh at 10CRIC!

Whether you sign up to one of the best in-play betting sites or a bookie offering cricket live streaming, Zimbabwe vs Bangladesh is shaping up to be a seriously exciting event. Featuring 3 different forms of cricket, there are going to be so many exciting markets for this series to bet on from India!