Rain has repeatedly disrupted the T20I series between West Indies vs Pakistan , with the third match ending in a no result last Sunday. The final T20 match between the 2 teams is set to take place on Tuesday 5th August, with Pakistan 1-0 up. Take a look at the latest odds, tips and analysis below!

Schedule for West Indies vs Pakistan

The West Indies have only announced a provisional Twenty20 squad for the three series played on West Indies soil over the next couple of months.

Pakistan has released a squad for both the Test and Twenty20 series.

While cricket is most certainly a team sport, every team has a few standout players that can dramatically turn the tide of a game or produce stellar results throughout. For successful West Indies vs Pakistan betting results, it can really pay to know who the big names are. Below are the key players from each side that we expect to play a big part in the upcoming series.

The West Indies haven’t announced a Test squad yet but, we do have a provisional Twenty20 to focus on – and it is a stacked side indeed!

Pakistan has released two stacked squads for this series, with a few of the players on red-hot form!

Bet on West Indies vs Pakistan at 10CRIC!

The best way to make informed decisions for West Indies vs Pakistan betting is to fully understand the form of both teams and their players. We've analysed both teams below.

The West Indies have shown some positive Twenty20 form with a 2 – 1 defeat over Sri Lanka earlier in March, but unfortunately failed to net a result in a two-match Test series, which resulted in two drawn games. West Indian bowlers failed to prevent Sri Lanka from scoring large totals in the first Test and did not manage to end Sri Lanka's final innings in the second.

The West Indies have several Test matches and Twenty20 matches against strong South African and Australian sides between now and the 27th of July. All these games will be played in the Caribbean, and will certainly provide the Windies with some positive experience, regardless of the results.

Pakistan has played a great amount of Test cricket considering the current global climate. From five Test matches in 2021, Pakistan has won four – including big wins against South Africa in January/February. That good run of form has continued with two more wins against Zimbabwe that saw both matches result in victories by more than an innings on both occasions.

Those focusing on Twenty20 West Indies vs Pakistan betting should be aware of Pakistan’s excellent run of Twenty20 form in 2021. Pakistan has won seven of the 10 Twenty20 matches they have played this year – including four wins from the last five games. The last matches were recently played at the end of April, so Pakistan could definitely be considered to be in top Twenty20 form!

Different conditions favour different players and teams entirely. It certainly pays – literally – to be familiar with pitch conditions before placing a bet on cricket online. Will the West Indian grounds favour the classic spin and swing of Pakistan’s bowling attack, or will the Windies' pace and bounce attack thrive on the harder wickets?

To give you some insight ahead of your West Indies vs Pakistan betting, below is our expert analysis of the cricket grounds.

The Guyana National Stadium was purposely built for cricket – specifically to host the Super Eight matches during the West Indies hosting of the 2007 World Cup. Despite its youth in comparison to other cricket grounds in the world, it does have some history behind it. In 2007, Sri Lankan fast bowler Lasith Malinga became the first bowler to take four consecutive wickets in four balls in an international match.

The square has only hosted 6 international Twenty20 matches in the 2010 T20 World Cup. However, it is the home of the Caribbean Cricket League team, the Guyana Amazon Warriors. Due to the ground's infancy and only hosting a handful of T20 games, Pakistan has never actually played a Twenty20 match here.

Certainly a ground to favour the quicks, Sabina Park is world-renowned as one of the hardest and fastest pitches in international cricket. The ground has slowed down in recent years – not quite the batsmen’s nightmare it once was in the 70s and 80s, but still maintaining the electric atmosphere that Jamaica is famous for.

Cricket historians and Pakistan cricket fans will certainly remember the monstrous 365* belted against Pakistan by West Indian legend Sir Garfield Sobers in 1958. The ground has hosted 54 Test matches, and the Windies have won 24 matches to 14 away team wins. However, Pakistan has won the last 2 Test outings against the West Indies at Sabina Park in 2017 and 2005.

Looking for a few pointers? Our experts have provided below top betting tips and match prediction insights for West Indies vs Pakistan betting.

Ready to start placing some wagers? Have a look at our guide to the betting payment methods to fund your account with to ensure you enjoy a top-notch, hassle-free experience. For further guidance, check out our key stats and head-to-head records for both these teams below. 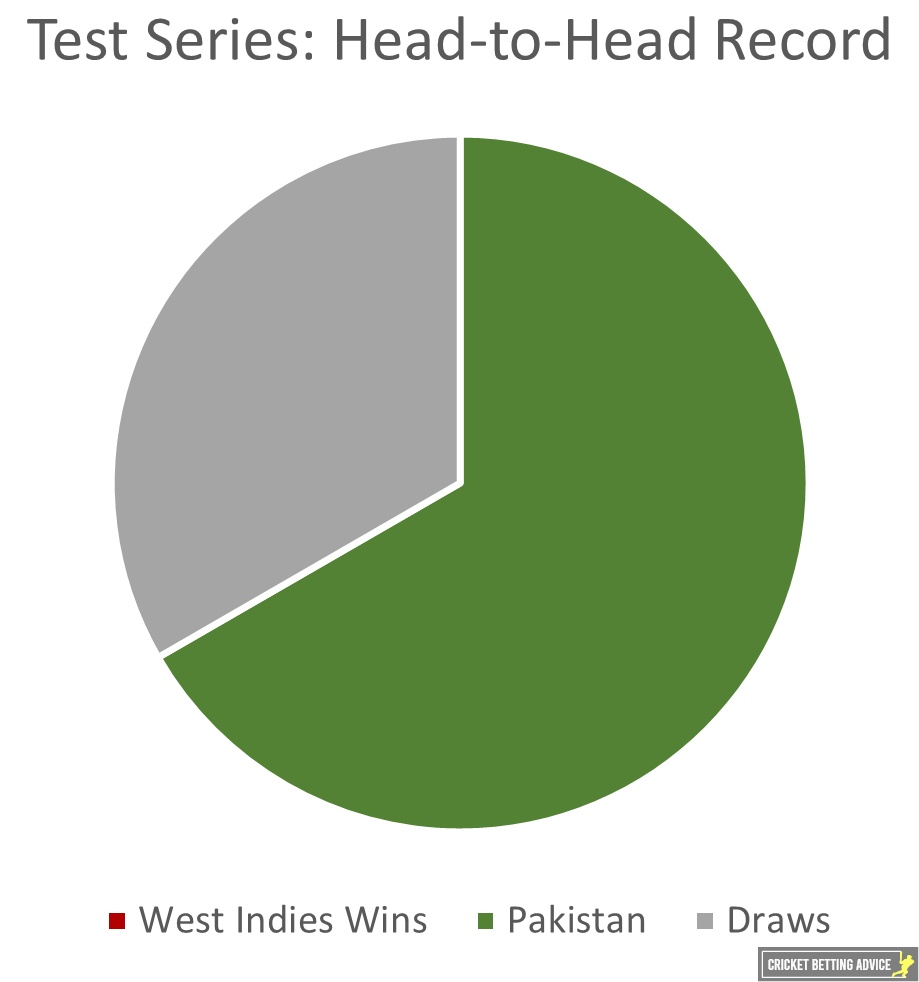 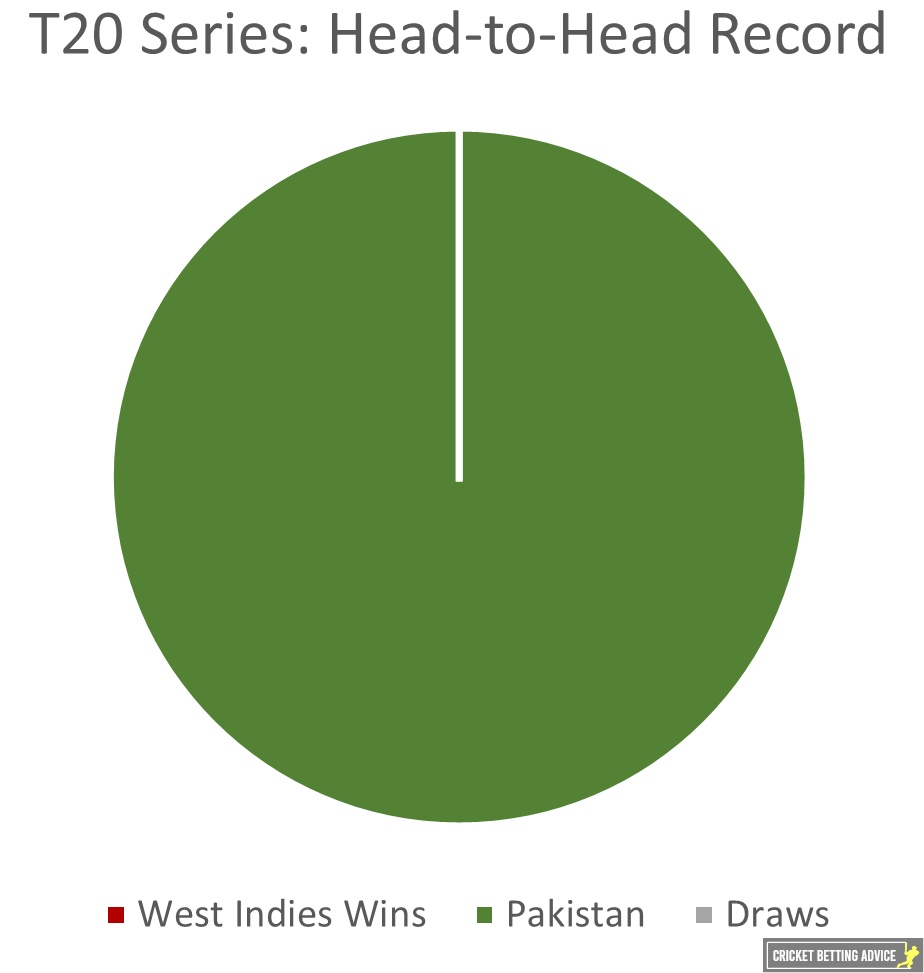 History of West Indies vs Pakistan

Like a few of the major cricket-playing nations, the West Indies and Pakistan have a lengthy history. The first match was in 1958 in what must have been a batsmen’s paradise – almost 1,000 runs were scored in a drawn test match at Kensington Oval, Bridgetown.

Cricket badgers will surely be aware of that famous first tour of the Caribbean that was the only test series in history to feature two triple centuries. Pakistan’s Hanif Mohammad struck a giant 337 in Bridgetown, only to see Sir Garfield Sobers smash a record-breaking 365* at Sabina Park.

You’ll struggle to find two teams over such a long period to be more equally matched than the West Indies and Pakistan. In the more than 60 years these nations have battled each other, they have played a total of 200 times with 91 West Indian victories and an amazing 91 Pakistan victories as well.

Which are the best sites for West Indies vs Pakistan betting?

While many excellent betting sites offer West Indies vs Pakistan betting, we believe that 10CRIC, bet365, and Betway are among the absolute best. All three provide excellent odds, and two even offer live streaming!

When will West Indies vs Pakistan take place?

We haven’t got long to wait before the West Indies vs Pakistan betting can begin! This series is set to begin on the 27th of July, when the first of five Twenty20 matches will take place.

This series will take place in the West Indies, who will host Pakistan at Guyana National Stadium in a 5 match T20I series and 2 further Test matches at Sabina Park.

Where can I watch West Indies vs Pakistan?

There is more than one way to watch this fantastic cricket tournament in the Caribbean. A few of the betting sites on our list provide Indian punters with live streaming, meaning you can watch the match while placing West Indies vs Pakistan betting wagers. Like the other upcoming series in the Caribbean, FanCode maintains the broadcasting rights for the West Indies matches, and Indian punters can use their online platform to check out the action.

Bet on West Indies vs Pakistan at 10CRIC!

There is no shortage of great online bookmakers to enjoy West Indies vs Pakistan betting, with many also offering cricket live streaming to boot.

To discover some of the most dynamic live markets around, check out our list of the best in-play betting sites, where you'll also find some highly useful match insights.