Draw 1 apiece, West Indies vs Australia will lock horns again in the final of a 3 ODI series. Read below for the latest odds, tips and analysis!

Schedule for West Indies vs Australia

Bet on West Indies vs Australia at 10CRIC!

While the West Indies are yet to announce any sort of squad, we can work with the assumption that the team will most likely be similar to the one playing South Africa in June. That series is also being held in the West Indies and only minor changes would be expected.

Australia has picked an extended 23-man squad for both the ODI and Twent20 matches in the Caribbean this upcoming July. This includes 8 players who missed the last T20 tour of New Zealand back in March.

We expect the team to be trimmed closer to the start of the series, however, with leg spinners Swepson, Zampa, and Sangha our picks to miss this series.

Many markets for West Indies vs Australia betting at the best cricket betting sites are focused on individual players. And, as we all know, key players can impact a game in a big way. That means you should be at least familiar with the truly standout players from each side, who are most likely to produce game-changing performances during the West Indies vs Australia series.

They say past form is an indicator of future success. Therefore, it is very important to have a good understanding of how teams and their players have been performing in recent matches. To make sure you start this series on the right foot, our experts have analysed the recent form of both sides to best guide your betting decisions in the West Indies v Australia series.

West Indies' form will be interesting to watch, considering the nation still has some cricket to play before their series against Australia. In June, West Indies are hosting South Africa with 2 Test matches and 5-match Twenty20 series. This will be sure to affect their performance against Australia directly after in July.

The West Indies are running off the back of top Twenty20 form with a 2 – 1 defeat of Sri Lanka in recent March. It's important to note that the West Indies achieved victory even without several key players in the mix, such as Chris Gayle and Keiron Pollard.

In ODIs, the West Indies have played 6 matches with 3 wins – including a 3 – 0 loss to Bangladesh, which included losing by a mammoth 120 runs in the final match. However, in the most recent 3 match series, played against Sri Lanka, the West Indies won all three matches convincingly.

If the West Indies expand on these recent wins with a successful campaign hosting South Africa, the Windies will have plenty of good form to bring against Australia in July.

To Australia’s credit, their wins in that series were very convincing, and their final loss was rather marginal, with India picking up the win by only 13 runs. While their most recent form is strong, those matches were played back in November and December, meaning it’s been a considerable amount of time since Australia has played a ODI match.

Luckily, Australia has also played a great number of Twenty20 cricket between now and 2020. Since February of 2020, Australia has played 14 Twenty20 matches with only six wins. Australia’s most recent T20 cricket was played in March, and resulted in two Australian wins from three matches against a strong New Zealand.

If we consider Australia’s form since the beginning of 2020, a notably hit-and-miss pattern emerges. However, Australia’s most recent and final matches of 2020 resulted in confident wins.

We’re not likely to see a lot of spin take place, as these two teams dominated by hard-hitting batsmen and lightning-quick pace bowlers will look to exploit those traditionally bouncy decks! When placing a bet on cricket online, it pays to know the pitch conditions. Some batsmen struggle in windy conditions, while Australia’s pacemen add a few MPH on a West Indian. pitch. In addition, home ground advantage should always be taken into account.

Below, we have included a few expert insights of the cricket grounds to aid your West Indies vs Australia betting strategy.

The Daren Sammy Cricket Ground is an ideal location for cricket, as it is located in the driest part of Saint Lucia. A serious amount of cricket has been played here, and in 2010, the venue hosted the ICC World Twenty20, including the semi-final match that saw Australia through to the finals.

Australians will have pleasant memories of “The Mecca” of cricket grounds. In 2007, Australia defeated Sri Lanka in the ICC World Cup final. The square, covered in sow in with Princess Bermuda Grass, typically gets better to bat on as a game wears on, but most teams often choose to bat first.

One might think the West Indies have a distinct home ground advantage at this ground, but Australia have won 4 of the 6 matches played at Kensington Oval over the decades.

We can learn a lot from history, of which there is thankfully a lot to analyse between these two teams. Our historical data guide will be sure to help you make informed West Indies vs Australia betting decisions. 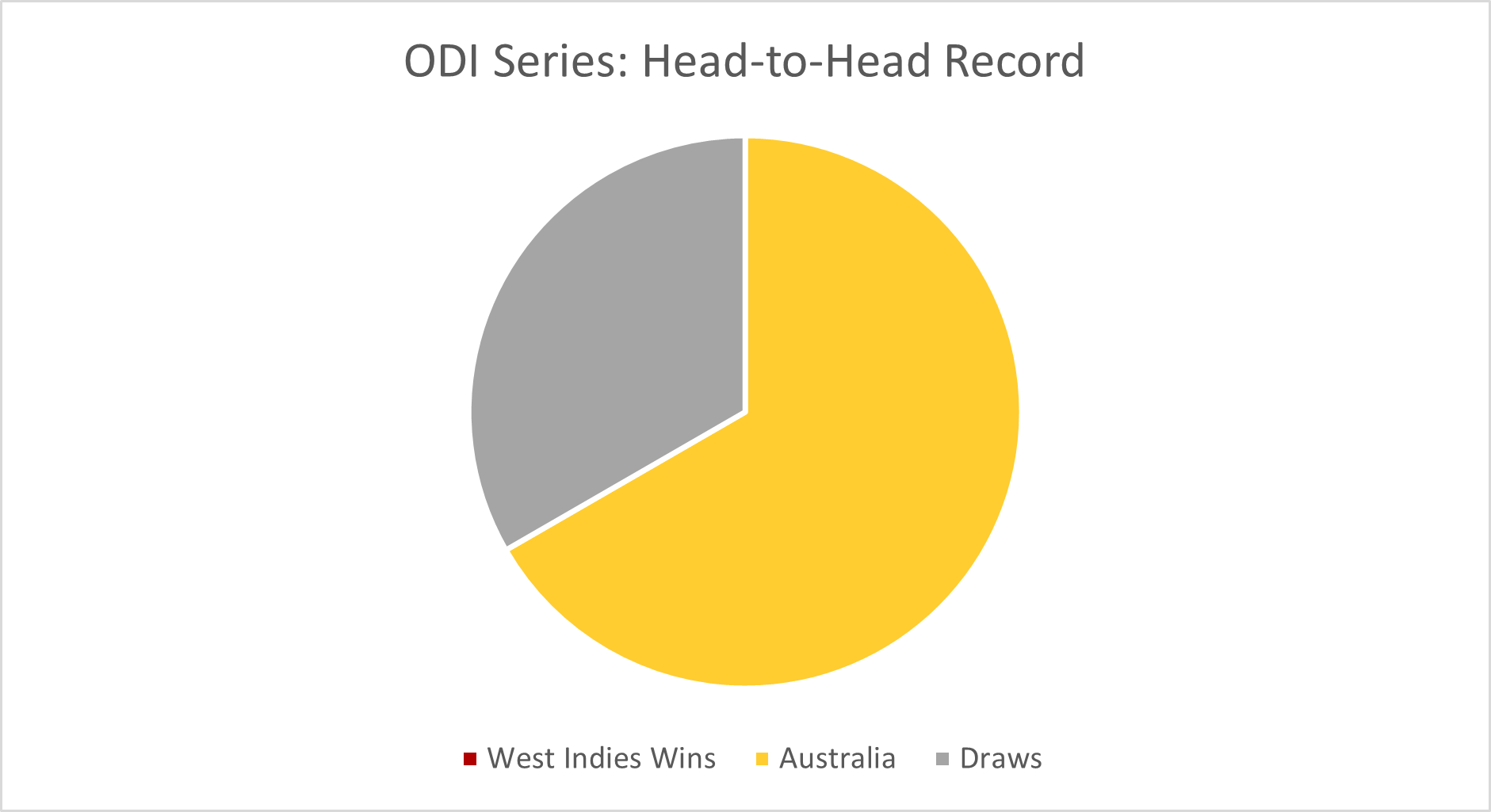 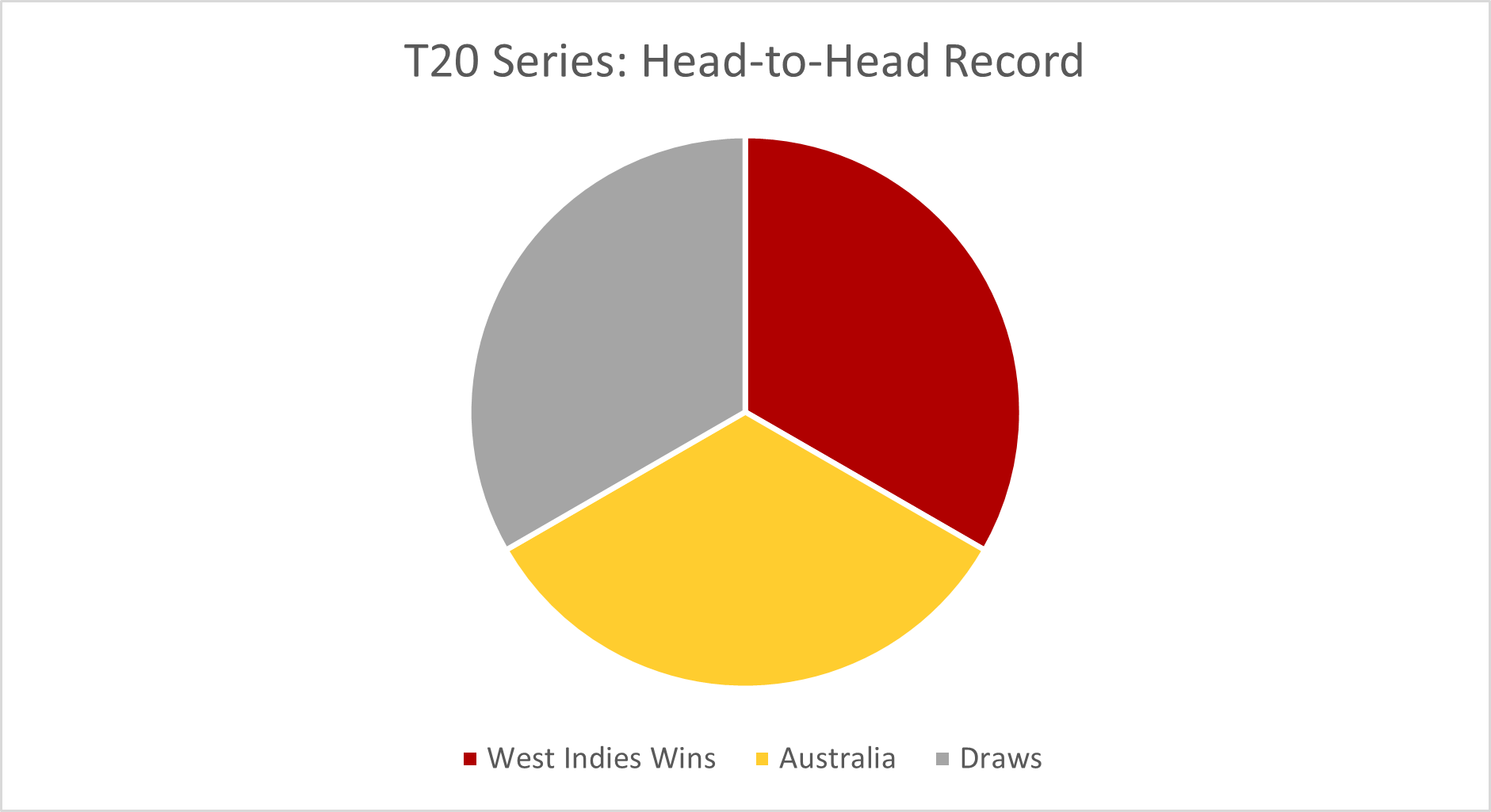 History of West Indies vs Australia

Australia and the West Indies share a very long cricketing history. The West Indies first played Australia in 1930-31, only 3 years after becoming a Test-playing nation, and were defeated by a side that contained the likes of Don Bradman and Stan McCabe.

Both sides have gone through alternating periods of dominance in the past. For example, the West Indies were unstoppable against Australia in Test matches between 1978 and 1993, while Australia hasn’t lost a Test series against the Windies since 1994. To that end, Australia also has not lost a ODI series to the Windies since 2004.

Which are the best sites for West Indies vs Australia betting?

You'll certainly be spoilt for choice when it comes to finding platforms offering West Indies vs Australia betting. However, we think 10CRIC, Betway, and MELbet are the top 3.

When will West Indies vs Australia take place?

Those keen to start their West Indies vs Australia betting adventure will be pleased to know that the starting date is 9th of July. This will be the first of five Twenty20 matches and three ODIs to complete the series.

Once the West Indies have finished their series against South Africa, they will host Australia. For this reason, don’t forget to consider West Indies pitch conditions when putting together a strategy for West Indies vs Australia betting.

Where can I watch West Indies vs Australia?

There are a couple of options to watch this series – if you can’t get yourself to the Caribbean, that is! Several bookies offer cricket live streaming, allowing you to watch the action as it unfolds while also taking part in some West Indies vs Australia betting. FanCode continue to hold the broadcasting rights to West Indies cricket series for Indian viewers.

Bet on West Indies vs Australia at 10CRIC!