England vs Sri Lanka matches are something all cricket fans enthusiastically await. After suffering a 2-0 Test series defeat against England in January, Sri Lanka will be determined to redeem themselves in the ODI and T20 series scheduled to be held in England this month.

In this betting guide, we will cover some of the best in-play betting sites, match statistics, team data, most popular betting markets, and more.

Amidst the ravaging uncertainty surrounding top cricket tournaments, cricket fans will finally have a fortnight of quality cricketing beginning in the last week of June, with England and Sri Lanka facing off in the much-awaited series.

The two teams will play six matches, evenly split between T20 matches followed by ODIs. Bettors can expect to encounter excellent betting markets with the entertaining T20 format in the picture.

There were doubts surrounding the series due to rumours of discontent between the Sri Lankan cricketers and their board regarding some contractual issues; thankfully, however, that has been laid to rest, and the tournament has been given the green light to go ahead.

The England vs Sri Lanka tournament will commence with a T20I match at Cardiff on 23rd June 2021.

The series is scheduled to start in some weeks, though bookmakers are yet to release betting odds for the England vs Sri Lanka series. This is probably because England is yet to formally announce their team for this series, something which usually plays a crucial role in determining odds.

England vs Sri Lanka will provide a plethora of betting opportunities for punters to enjoy.

Below are our expert tips and prediction for this extensive series with six games:

We will update this section with the best betting markets for this match once the odds have been released. However, below we have listed a few popular bet types to consider based on past player performances and pitch history.

Schedule for England vs Sri Lanka

England will play against Sri Lanka right after the Test series with New Zealand. The squad is yet to be officially announced, but we can expect the lineup to be almost similar to the team that toured India.

England ranks first in ICC’s T20I team rankings. They have impressive batting firepower in Butler, Roy, and Morgan, as well as an equally lethal bowling lineup.

The team does not have any major injury issues. Captain Morgan recuperated from the hand injury suffered during the India tour soon after the match, and Sam Billings recovered from his collarbone sprain during the series too.

In addition to acquainting yourself with sources providing the best cricket prediction in the world, the best way to bolster your chances of placing winning bets is to familiarise yourself with the key players of each team.

Such knowledge will help you make more informed wagers and predictions regarding the team's performance overall, and, ultimately, the outcome of the match itself.

England and Sri Lanka have resumed their cricket tours after a series of strict lockdown guidelines, and have already faced each other in Sri Lanka for a Test series. Both the teams recently played ODI and T20I matches against other national teams, displaying a formidable form all throughout, although neither could win the series.

On the ODI and T20 front, England has played only one ODI and T20I series in 2021. Both were played against India, and England lost both (ODI by 2-1 and T20 by 3-2). However, all matches in these series were closely contested matches, and we cannot write down a side like England for such losses.

As for Sri Lanka, the side has already tasted a test series defeat against England in 2021, so facing the winners on their home turf will definitely be a challenge.

The team visited the West Indies for an ODI and T20 series in March 2021. They suffered a tightly contested 3-0 and 2-1 defeat in both the series, respectively. They also toured Bangladesh in May for an ODI series, but lost with a score of 2-1.

However, what stood out was the impressive performance of the newly appointed captain Kusal Perera in the last ODI match against Bangladesh. A fine century with strong support by his deputy, Kusal Mendis, powered them to victory in the last match of the series.

The pitch conditions play an integral role in determining various aspects of a match, such as match score, number of wickets, and the kind of bowling which will dominate the match (pace or spin). Pitch reports are crucial for determining the betting markets on which you as a bettor should place your money.

The first and the second match will be held at the Sophia Gardens Cardiff Stadium, located along the banks of the River Taff in Wales.

The pitch is a hunting ground for pacers, and you can expect to see a constant flow of batsmen onto the field. That said, the pitch is equally suitable for batting. 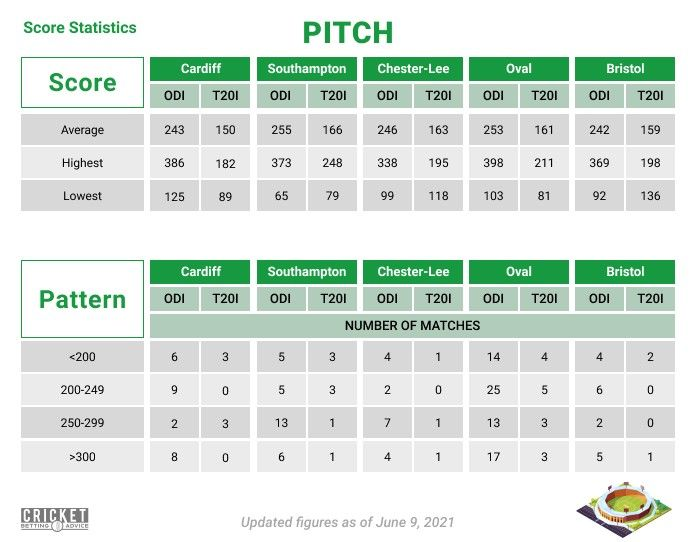 Statistics and empirical data are vital tools for all cricket punters. Below are some key stats that will give you a deeper insight into England vs Sri Lanka encounters.

Knowing past performances of both teams can play a pivotal role in determining betting strategies. Here are the latest stats about the past encounters of both the teams and their head-to-head records. 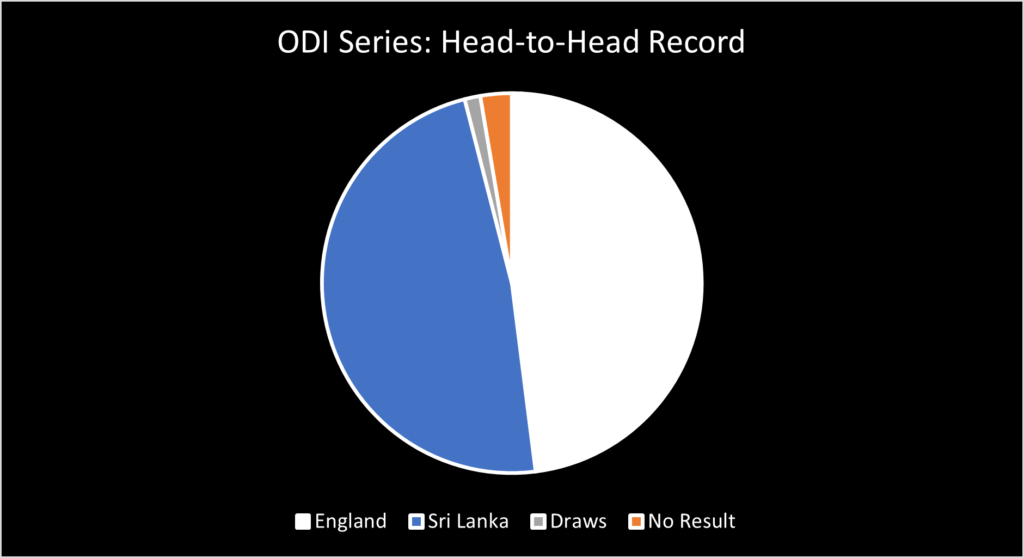 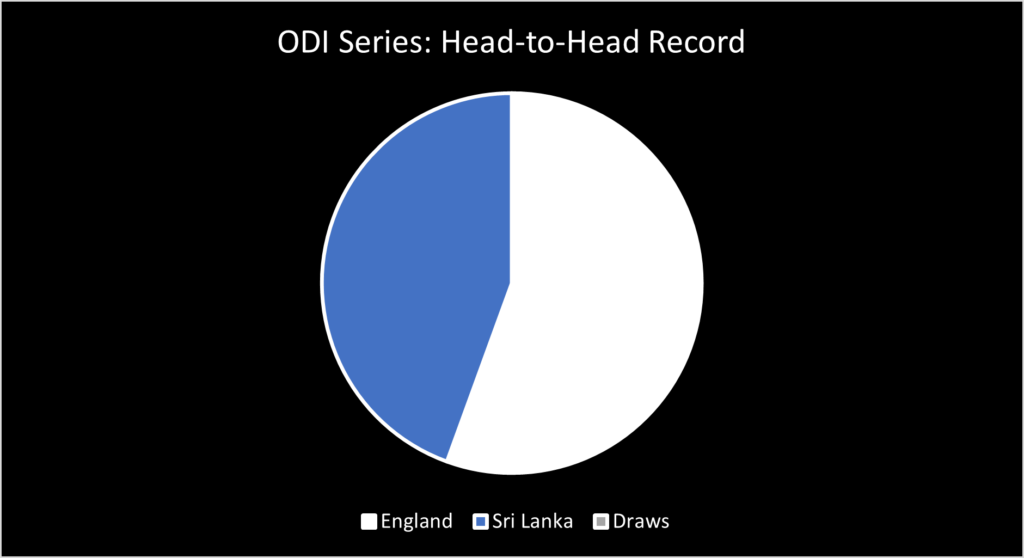 History of England vs Sri Lanka

England vs Sri Lanka matches have always been a sight to behold, and have been responsible for many heart-in-mouth moments for cricket fans. Sri Lanka’s win against England in the group stages of the 2019 World Cup was something all cricket enthusiasts remember.

The match scores have rarely been dismal, with median scores in T20s hovering above 150 runs and above 250 runs in ODIs.

However, Sri Lanka has not been able to crack any series against England recently. In the past five years, the teams had two ODI and two T20 bilateral series, and England won both. A major reason for Sri Lanka’s downfall is the change of guards, with players like Sangakarra, Jayawardene, and Thisara Perera retiring from cricket, and new players yet to firmly establish their ground.

Which are the best sites for England vs Sri Lanka betting?

Cricket is one of the most followed sports worldwide, and for which many bookmakers provide a wide selection of betting markets. Taking into account factors such as safety, reliability, and user experience, we would place bet365, 10CRIC, and 1xBet on top of our list for the best cricket betting sites for England vs Sri Lanka betting.

When will England vs Sri Lanka take place?

The first encounter between England and Sri Lanka is a T20 match will be held on 23rd June (Wednesday).

The England vs Sri Lanka will be played in Cardiff at the Sophia Gardens Cardiff grounds.

Where can I watch the England vs Sri Lanka match?

Sky Sports will broadcast the match in the UK. However, you can also use one of our listed live cricket streaming sites, and watch the game live through your desktop or mobile.

England seems to be the clear frontrunner for this tournament, but Sri Lanka is no stranger to success. The Sri Lankan selectors have made several technical changes to the team by appointing Kusal Perera as the captain and bringing in young blood.

However, ODI and T20 cricket often sees the tide turn faster than expected. Be ready for a rollercoaster series that can throw up some amazing betting opportunities!

Study the betting markets carefully before placing bets and as always, choose value over everything else. Finally, remember to bet safely and responsibly.