With a huge growth over the last decade, women’s cricket has become one of the hottest sports to bet on at the best cricket betting sites in India. There are several women’s competitions that rival the most popular top cricket tournaments in the world.

You won’t have to look very hard to find an exciting women’s cricket match to enjoy and wager on. Women’s cricket is now played in popular domestic competitions, thrilling franchised leagues, as well as major international tournaments like Women's Cricket World Cup – so be sure to keep an eye out for these women’s competitions when you’re looking to bet on cricket online!

The Hundred is a professional franchise league in the United Kingdom, based on a new format that features only 100 balls in a match. This is a shorter format that is aimed at attracting a younger audience. The inaugural season of The Hundred ended in August 2021, with the Oval Invincibles taking the first women’s title.

The Women’s Big Bash League is the female version of the immensely-popular Australian Twenty20 competition of the same name. Eight teams feature local talent, emerging players, and international marquee players. The league has grown steadily in popularity and earned its own schedule in 2020, irrespective of the men’s league. ESPNcricinfo named the first season one of the “25 moments that changed cricket”.

Also known as the women’s IPL, this is India’s premier women’s Twenty20 tournament that, like the men’s IPL, features both local players and international stars. The competition is smaller than most, with only 3 participating teams. The IPL Trailblazers are the most recent winners and picked up their very first title.

Women’s cricket has come a long way. Today, female cricket tournaments are among some of the most popular in the world. Once upon a time, little thought was given to women’s leagues, but now women’s cricket features hugely-popular franchised leagues with major sponsors and massive crowds.

Female cricket has been around for longer than some may think – harking back to the 16th century in the United Kingdom – and even involved the occasional inter-gender matches. The first women’s cricket club was formed in 1887 in England and the first female cricket association was later formed in 1926. A first international tour was undertaken by England against Australia in 1934/5 but it wasn’t until the 1950’s that female cricket was played on an international scale.

Throughout the 1970s through to the late ’90s, female cricket evolved steadily, and by the mid-2000s, women’s cricket truly stood on its own. Today, women’s cricket is officially sanctioned by the International Cricket Council (ICC) and there are many popular international competitions.

Just like any other sport, there are always a few teams that dominate or are consistent in their performances. Women’s cricket is no different and there are a few international sides and Twenty20 franchise teams that are incredibly successful. If you like to back the winner, you’ll probably want to consider these teams when you head to the bookies.

With 264 total ODI wins since official recordings in 1973, Australia has almost 60 more wins than the next best cricket-playing nation, England. Australia also holds the top 3 records for most consecutive wins with 24*, 17, and 16, and holds the record for the highest successful run chase. The nation has also racked up 94 Twenty20 wins – only 15 behind Twenty20 leaders in England.

When it comes to the Twenty20 arena, England currently stands the tallest with 109 wins. England has won 208 ODI’s and only Australia has won more One Day International matches. Amazingly, England has tied with Australia for the most Test wins at 20 a pair. However, despite clocking the most Twenty20 wins in female cricket, England has failed to dominate in the ICC Twenty20 Women’s World Cup.

They have a particular rivalry with India and South Africa too – the Indian women’s cricket team being the most successful against England. England remains the 2nd most dominant team in international female cricket, and many of their international players are marquee stars in popular cricket leagues around the world.

Since the Australian Women’s Big Bash League is so highly regarded, we really couldn’t go without mentioning the most successful team in the competition. While the most championship titles in the league is a 3-way tie between the Sixers, Brisbane Heat, and Sydney Thunder with 2 wins each, the sixers have appeared in more finals. Captained by Australian star Elyse Perry, the Sixers have featured international marquee players from England, New Zealand, and South Africa.

How Do You Bet on Women's Cricket?

Betting on women’s cricket is no different from any other cricket event. You can still wager on the winner and various other exciting markets, such as series winner, highest scorer, most wickets, dismissal this over, and most sixes.

Like any other cricket event, simply find the event on any of your favourite INR betting sites and choose your preferred market. Select a bet amount and finalise your wager. You could even choose to make multiple wagers or add your female cricket bet to a larger accumulator bet for increased odds. 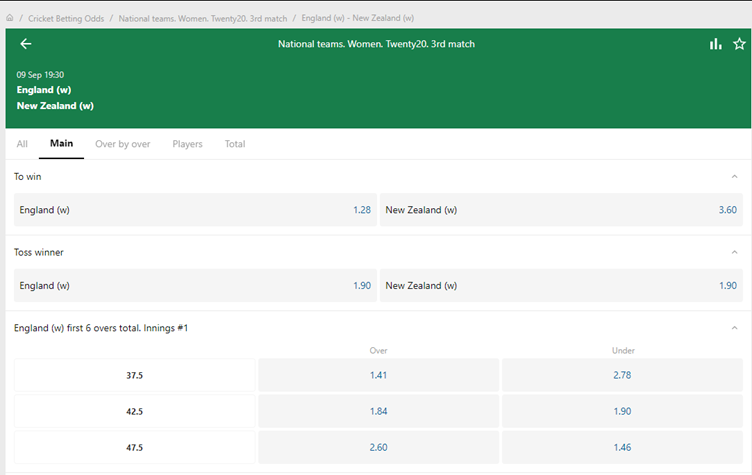 One of the easiest and fastest ways to bet on female cricket is by using any of the best cricket betting apps in India. Using an app means you can bet on cricket from anywhere, at any time. You can still use the same betting payment methods as the main betting site to fund your account, and being mobile means you won’t miss out on any dynamic odd changes during in-play betting markets.

The female game is certainly an interesting one. Many overall cricket records have been broken in female cricket and some of the numbers and facts will astound you. Here are just a few of the amazing facts and statistics of female cricket.

By now, it should be clear how exciting and popular women’s cricket has become; big sixes, plenty of runs, classic catches and thrilling wickets – the women’s game has it all! You’ll find plenty of great tournaments, leagues, and series to watch and bet on in India. So be sure to head to your favourite bookie and check out women’s cricket today!