Wimbledon occupies a special place in the tennis calendar, marking the third Grand Slam of the season. In this guide, we examine the best tennis betting sites for Wimbledon betting, some of the event’s most popular markets, and tackle a few FAQs.

These bookies are available to players all around the world, including in India, with many allowing players to bet in Indian Rupees.

Who is Favourite to Win the Men’s Wimbledon Tournament?

At the time of writing, Novak Djokovic is indisputably the clear favourite to add another Wimbledon title to his already bulging trophy cabinet. The Serbian world number one, who has won the most Australian Open crowns (eight) in the Open Era, has lifted the Wimbledon trophy on five occasions, and he remains the defending champion as the 2020 edition was cancelled due to the pandemic.

Rafael Nadal is currently trading as the second favourite. However, while the Spaniard is dubbed the ‘clay court king’, success at SW19 hasn’t come so easily, with his last title at SW19 awarded in 2010.

Other notable contenders include Roger Federer, who is an eight-time champion. This year's tournament could be his final hurrah, as he is in the autumn of his career. Meanwhile, the likes of Daniil Medvedev and Stefanos Tsitsipas are both looking to land their first-ever Slam title.

Who is Favourite to Win the Women’s Wimbledon Tournament?

As things stand, the women’s competition is considerably more open than the men’s tournament. World number two Naomi Osaka – who has four Grand Slam titles to her name – is the favourite. She is desperate to crack the code on grass, as all her major triumphs have come on hard court.

A special mention should be given to Simona Halep, who thrashed Williams in the 2019 final. She will be eager to notch up a second title at SW19.

Generally, Wimbledon betting predictions work in the same way as any other Grand Slam tournament, whether it be the Australian Open, French Open or the US Open.

Although the hallowed turf of Wimbledon has been a fortress for Federer, Djokovic’s quest for greatness has been unrelenting, and he is formidable on grass. Unsurprisingly, it is hard to look past Djokovic, who is the short-priced favourite to win Wimbledon.

On the women’s side of the draw, Williams will be desperate to draw level with Court, especially as she feels at home on grass. However, the likes of Petra Kvitova and Simona Halep may have something to say about that.

Last year, Wimbledon was cancelled due to the uncertainty surrounding the pandemic. However, the tournament is expected to take place this year, set to get underway on 28th of June.

While Wimbledon will feel like a slimmed down version compared to previous editions in terms of fan attendance figures, there are measures being taken to ensure spectators will be kept safe. There is likely to be a maximum spectator capacity of 25%.

Reasons to Watch & Bet on Wimbledon 2021

Whether you are casual or a seasoned tennis fan, Wimbledon betting is always an enriching experience. Below are five reasons you should get involved with and follow this year’s tournament.

When it comes to Wimbledon betting tips, there are a few things to bear in mind if you want to boost your playing bankroll in the long-term.

Wimbledon is traditionally played on a grass court. which also happens to be the slickest and fastest surface of all the Grand Slams. The tactics have changed considerably over the years, as previously Wimbledon favoured those who were serve-volleyers, such as Pete Sampras. Now, players prefer to trade exchanges from the baseline.

Given the prestige that is attached to Wimbledon as a tournament, a player’s record will carry sway with bettors. So, for example, if a player is not renowned for being a fantastic grass-court exponent, then perhaps you should steer clear of them for the outright tournament winner market.

If two evenly matched players are facing off against each other, it may be difficult trying to pick a winner. The beauty of in-play betting sites is that you can see how sets unfold before placing a bet.

Some matches, for example, may go the full distance and last five sets, so this enables you to be a bit cannier. If you are good at spotting patterns, such as whether a player is good at returning and breaking their opponent, they may be worth backing.

Stamina and athleticism are two keys for success at Wimbledon. Like any Grand Slam event, it can be a punishing schedule with little recovery time.

Staying in peak physical shape is crucial if a player is going to go far in the tournament. If they have any small injuries prior to the start of the event, then they should be avoided – this should be factored into your strategy when looking at Wimbledon betting odds.

Wimbledon betting is very popular with seasoned tennis fans, but which are the most popular betting markets for this event?

The Wimbledon Championships operates in a similar structure to any other traditional Grand Slam event. It is a single-elimination tournament where each singles or doubles match pits one player or team against each other, with only one advancing.

There are 32 seeds chosen for each category, with the top seeds are placing into the first section of the draw. 128 players take part in the singles event, while there are 65 pairs competing in the double’s tournament.

After the qualifiers, the first round matches get underway. For men, matches are a best-of-five sets affair, while women's are best-of-three. Wimbledon is currently the only Grand Slam event where there is no play on the middle Sunday as it is a rest day, although this is set to change from 2022. On the second Monday, fourth round matches begin. The women’s Final this year will be on Saturday 10 July, with the men’s Final the day later. All matches take place on grass court, with the Finals on Centre Court, the latter having a capacity just shy of 15,000 people.

Details regarding prize money have not been formally released yet. In 2019, the women’s singles and men’s singles champion each picked up a cheque for £2.35 million. The runners-up in the singles received £1.18 million. For the doubles, the men and women received £540,000, while the runner-ups took home £270,000 each.

Wimbledon is the oldest Grand Slam tournament on the tennis circuit. Its origins date back to 1877, when the inaugural edition of the competition was held at the All England Croquet and Lawn Tennis Club where Spencer Gore was crowned the first men’s singles champion.

Over the years, there have been some incredible rivalries, such as John McEnroe v Jimmy Connors in the 1970s, and Roger Federer v Rafael Nadal in the 2000s. Centre Court is the showpiece court at Wimbledon, and Federer is widely regarded as one of the best players to wield a racket at SW19.

NB: 2020 Wimbledon didn’t take place due to the global pandemic.

Wimbledon Champions – 5 of the Most Successful Winners

Men’s Singles Winners with the Most Titles

Roger Federer currently leads the way with 8 Wimbledon titles – the most in history. He turns 40 in August.

Pete Sampras is one behind Federer, while Novak Djokovic currently has 5 Wimbledon titles to his name. He will have Federer in his sights!

Women’s Singles Winners with the Most Titles

Martina Navratilova won Wimbledon a record 9 times during her career in the Open Era, while Steffi Graf picked up 7 Wimbledon titles. Serena Williams has hoisted the Wimbledon trophy aloft on 6 occasions. 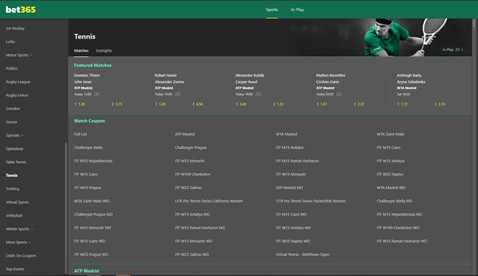 When does Wimbledon start?

Can I bet on Wimbledon?

Yes, you can. Make sure the bookmaker you play with accepts several different betting payment methods, especially if you wish to make deposits and withdrawals with the same payment option.

Which are the best Wimbledon betting sites?

Most bookies will offer betting markets on Wimbledon. We think you’ll get an enriching betting experience from bet365, Betway and Unibet.

Where can I watch Wimbledon?

Wimbledon is broadcasted live on BBC 1 and BBC 2. On top of that, there are plenty of bookies that offer live streams, including bet365.

What court type is Wimbledon contested on?

Wimbledon is a highly compelling tournament anticipated by many. The grass court event draws a massive audience on a yearly basis, and from a betting perspective, it continues to attract great interest. So sit back, and enjoy a fortnight of superb tennis.