If you think you can predict which teams will win a lot of matches in the future, and the margin by which they will win, then the Superbru fantasy sports site or Superbru app is for you! This guide to Superbru Fantasy Sports will explore the virtues of using Superbru to play fantasy sports free of charge. We will also look at how different games run and how to get started!

What Is Superbru Fantasy Sports All About?

The Superbru Fantasy Sports website launched in 2006, but the roots of the company go back as far as 2001, when it began as a paper-based prediction game at the University of Cape Town. It made the leap to a digital format two years later, but was only available privately between 2003 and its full launch in 2006.

Over the past two decades – particularly since SportEngage Ltd’s acquisition of the site in 2011 – it has grown to include every major sport. It is this bold choice to expand into less common areas of fantasy sport, such as golf and cycling, which has helped Superbru expand its global outreach, and secure its long-term future as a major force in its sector.

The core basis of Superbru’s games involves choosing the winner and the margin of victory, meaning that you are essentially placing a parlay bet on the outcome of a match – the only difference is, you do not wager any money.

Signing up to use Superbru is very simple. After finding the homepage, click the log-in tab in the top right-hand corner, and then select ‘create account’. Immediately after registering, you will be presented with a list of ‘today’s most popular tournaments’. You can go straight to any of these, or look at the full list below, by clicking on your favourite sport’s drop-down menu. You can also access live tournaments from the left-hand menu on your user dashboard: 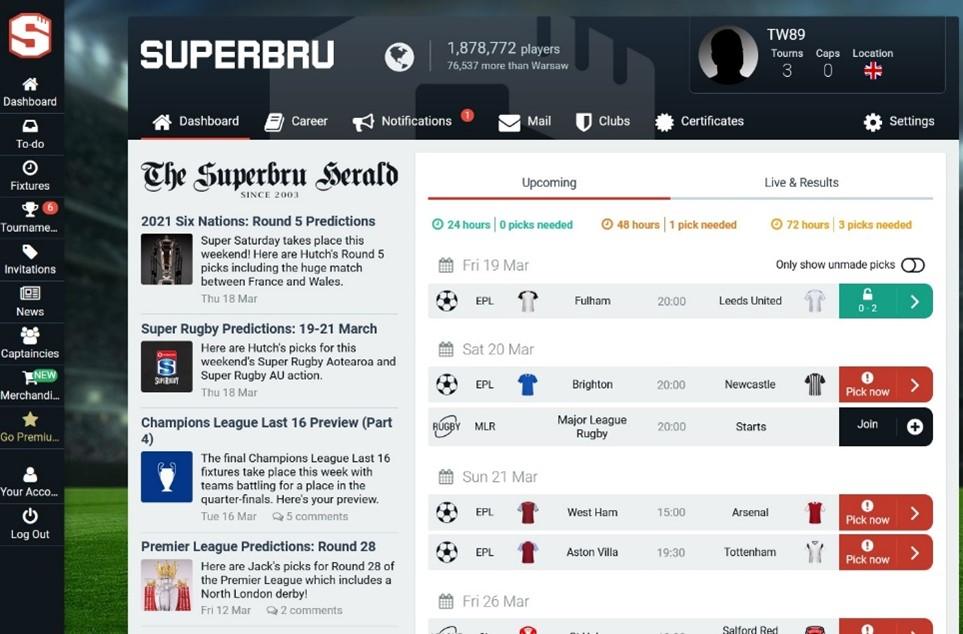 The Superbru sports predictor for cricket awards points based on how accurately you predict the outcomes of matches. Choices are automatically logged into your leagues / pools, so you will only need to make them once. Whether using the site or the Superbru app, most team / ball sports (including cricket) require this one simple step – and nothing else.

Once you have selected the tournament, you will be presented with a list of fixtures. You then pick a winner and the margin of victory using the highlighted action buttons in this screenshot. Here, we picked the Royal Challengers Bangalore to beat Mumbai Indians with a ‘Narrow Win’. 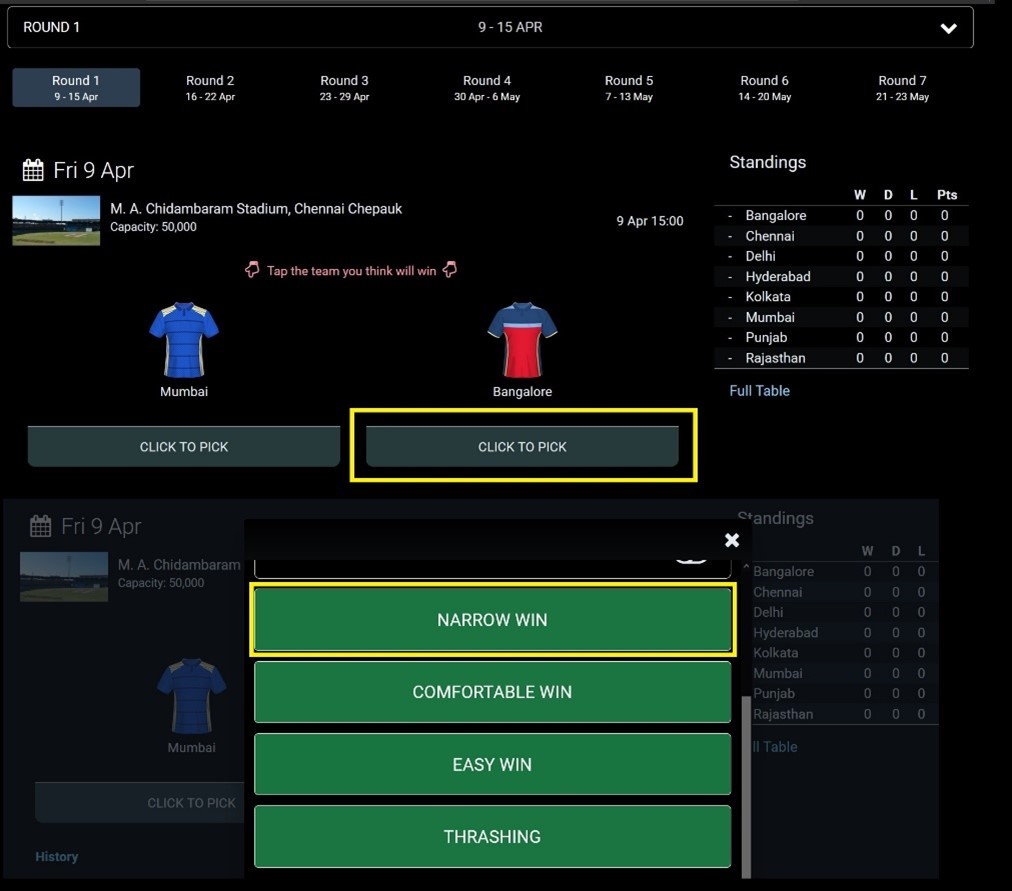 For the purposes of scoring, this is how each type of win is classified: Points are awarded as follows:

Although it does not affect the way you score points, you also have the ability to ‘lock’ any of your predictions. After doing so, you will be able to view the predictions of others for the corresponding game. However, if you choose to lock, you will NOT be able to change the prediction afterwards.

This is the schedule for 2021. The first round begins on 9 April, and predictions can be made right up to the toss. You can join the contest at any time during the season.

The fixtures themselves are available on the official IPL website.

Think you can beat the experts at CricketBettingAdvice? By entering the code “sankrusk” you can join our own league. There are no prizes available at present, but it is certainly a great way to get started with the site’s fantasy cricket experience if you have never used Superbru before!

This is how to join:

While the IPL auction can often be a game-changer, cross-referencing pre-season odds with the players each team has at their disposal is a good way of correctly guessing the margin. Simply put, if an outright favourite is hosting the tournament’s biggest outsider, and the away team has travelled the length of India, then the natural trend will be for the pool to pick an ‘easy win’ or ‘thrashing’ in favour of the hosts.

Correct as of 16 March 2021, below are the current outright odds for the IPL season. Teams at or near to the top will be more popular picks to win, while most people will pick the top two more than others to get ‘comfortable’ or ‘easy wins’, or possibly a ‘thrashing’.

A heavy presence of expensive players with a good international track record also adds to the likelihood that a team will be frequently picked for ‘comfortable’ wins or better.

These are the players who may well make their respective teams more popular than they were in 2020, thereby affecting prediction strategies.

*This is not Chris Morris’ first stint with the Royals. He previously played for them in 2015 – his third season of IPL action – taking a joint-high of 13 wickets. His game has only improved since then, adapting to the nature of limited-overs cricket in a way that makes him invaluable to any IPL team. His 2020 IPL season was something of a vintage period, with the second-best bowling economy – behind only Jofra Archer – amongst players that had bowled at least 30 overs.

The Rajasthan Royals themselves have much to prove, after finishing dead last in the 2020 IPL season, with a sheer inability to gel on the field sealing that indignity. It is a particularly great insult for a captain like Steve Smith, and one that can only be avenged with a top four finish. Players with Morris’ talent can make that happen, and we can expect some good bowling performances from the Royals in the near future.

To get the most out of Superbru sports predictor IPL tournaments, we strongly recommend that you read our A-Z guide to the 2021 Indian Premier League. This guide will take you through the teams, key players and the matches that will shape dynasties in the world’s greatest club-level T20 league.

These are also other popular games which you can play on the Superbru sports predictor.

As Superbru is a South African company, it comes as no surprise that their Fantasy Rugby game was the first to take paper form back in 2001.

Those that are involved in running the site know extensively about the latest tournaments, with the most popular naturally being the Six Nations and the World Cup. At club level, the Premiership (England) and Top 14 (France) are the most popular amongst European users. So too is the Super League (England) for those that predict Rugby League format fixtures.

For fantasy rugby games on Superbru, you pick one team to win and the precise margin you think they will produce by pressing the ‘pick here’ action button, and then selecting your chosen option from the list. Points are awarded based on accuracy, with cash prizes available for perfect predictions. With Superbru sports predictor Fantasy Football tournaments, you simply pick the correct score to earn points. The points breakdown for the game is as follows:

You can also earn slam (bonus) points, based on the number of correct predictions. Below is a sample of the game, showing how simple it is to place predictions. 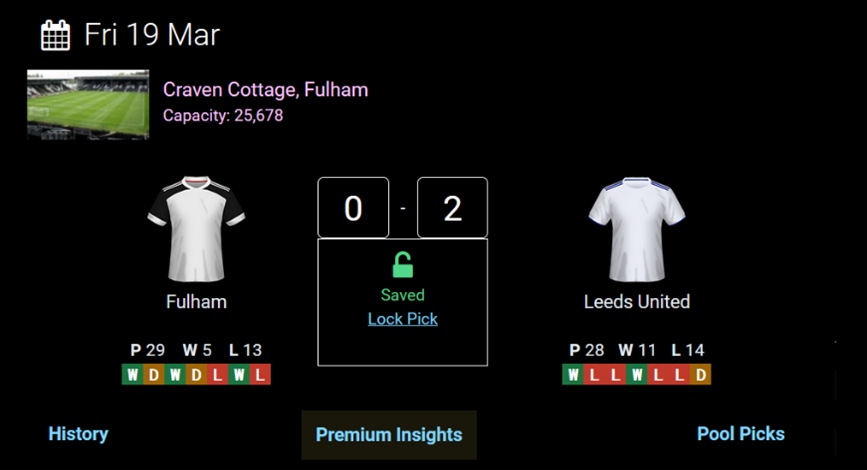 All of the most popular tennis tournaments are covered, including, of course, the four Grand Slam competitions: The Australian Open, the French Open, Wimbledon and the US Open. Points are distributed as follows, depending on the win margin of the selected player in a set or game:

The Superbru site also covers all of the major US sports, with the NBA, NFL, NHL and MLB being the biggest draws for American traffic. The precise scoring system for each tournament across those franchises can be seen on the Superbru site itself, though all of them reward accuracy in terms of guessing the winning team, top players, correct scoreline and the winning margin.

Is There a Superbru App?

The Superbru app is available on Android and iOS handsets. It is an excellently maintained app, offering all of the site’s features and an icon-driven menu that is very easy to navigate. You can also enable push notifications to ensure that you receive timely reminders, as well as updates about key tournaments and the deadlines to make your picks. The app was redeveloped in 2018, with the aim of streamlining the general playing process, and since that time, average review scores on independent sites have hit a new high.

Our findings show that the top provider of fantasy sports betting for cricket is 1xBet. Below you can see how easy it is to sign up for their contests. Yes, although you can pay for a premium subscription if you want unique insights into the top tournaments, amongst other perks.

Is there a CricketBettingAdvice IPL Superbru League I can join?

By entering the code “sankrusk”, you can join our very own league, provided you are not already in the permitted maximum of ten different pools. Entry is absolutely free!

Which are the most popular Superbru Fantasy Sports tournaments?

The ten-fold Premier league predictor, whereby you choose ten scorelines, is hugely popular due to the massive, life-changing prize on offer. In India alone, the IPL predictor is the most popular amongst users, as are any T20I or Test matches between rival countries – especially India v England and India v Pakistan.

How do I download the Superbru fantasy sports app?

You can download it from Google Play (Android) or the Apple Store (iOS). Alternatively, use one of the app download action buttons visible on mobile site’s landing page.

What does a locked / unlocked pick mean?

Unlocked picks can be changed, whilst locked picks cannot. Locking picks allows you to see the predictions of others, and strategise accordingly. This is not compulsory, but it happens automatically once the game begins.

When can I make my picks?

You can make picks as soon as Superbru loads the tournament and uploads its upcoming fixtures. In tournaments with knockout phases – especially World Cups in various sports – the turnaround time between the fixture upload and prediction deadlines is much shorter. On that note, the deadline for each game is the kick-off time or start of play.

What happens if a cricket match is rained off or drawn?

If a match is rained off, the same scoring system will be employed, with the Duckworth-Lewis-Stern (DLS) Method of projecting the final score for an abandoned game used to determine the win margin. Meanwhile, any match drawn and impossible to resolve through tiebreakers will see only the point for a ‘narrow’ win margin awarded. The team selected to win is void.

What if I don’t make a pick?

If you forget to make selections, you will be given default picks. The amount of weeks you can miss varies between tournaments, but in the case of T20 predictors, you get five defaults per tournament.

Overall, the best trait of Superbru’s games is their simplicity. Making picks and predictions is a quick and straightforward process, but despite the straightfoward nature of the games, the rewards are potentially huge. Few other sites can claim to offer the same magnificent prizes that Superbru does, and they are well worth checking out. Involving friends and family, and creating your own Superbru sports predictor pool only multiplies the enjoyment you get from this app.

As you read these very words, the site’s numbers continue to grow, which means that the jackpot prize values are also on an upward trajectory. Could you be the next big winner in Superbru history? The only way to find out is to sign up and play!